In the grounds of Owiny primary school, the number of people was growing exponentially per second. In the face of a full scotching sun everyone was dripping with sweat as each was converging to watch the sun perform a micro-epic with the moon. Here it was happily roasting every soul beneath it.

Nevertheless, a mood of gaiety hung in the hot atmosphere. It could be compared with a mood before a tense game. Traders and exhibitors were already making a kill especially those selling protective eyewear whether genuine or improvised. The official events were underway but less could be drawn into them. It was evident that many had not come for speeches and presentations save for that phenomenal one. All colors of man were represented: black, white, red or yellow. From the attires worn, one could predict the many nationalities present. Age was no issue: from infants and toddlers to crouching old women. One could wonder whether they could be able to describe what they had come to see in their local lingua! Many donned shirts proclaiming that they were there when the sun met the moon which was still meaningless. A daft thought of a no-show and its impact could not be avoided. 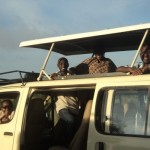 The wait for the show was anxious, hot and sweaty to say the least. By 16:00 hours all eyes got shifting to sun but it was as usual: too hot and not so friendly to the eyes. There were no signs an intruder (the moon) was coming in its way. That meant it was still a waiting game. The thousands of eyes at the grounds spelt unease. Not only because the possibility of a no show was creeping in but also because the skies were getting obscured by huge thick clouds rising from horizons. It would be a massive disappointment if mere clouds rose to blur out a much hyped and once-in-a-lifetime performance. 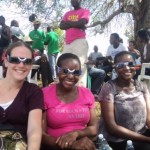 L-R, Astrid, Jackie and Patience enjoy the moment before the eclipse happened.

Life returned to the masses suddenly when it was noticed that a slight aperture of the sun was getting slowly eaten away. Like a dog seeing a bone, everyone sprung to their feet, reaching out for their protective sun glasses, X-ray films, sooted glasses, plastic utensils and comically: polythene papers and wrapping paper all in the name of catching the show.  For the doubting Thomases, that was an apt herald. To the naked eyes nothing was noticeable though. The excitement once again shot up. It was time to take photos, scream and get sucked into the moment. The proclamation words on the event’s shirts were rendered meaning thus many started dashing to buy them. The ultimate moment was lurking!

The excitement was drastically plummeted by a huge mass of thick clouds that totally covered the sun. in a flash, it was all tension in the viewers most of whom had traveled from overseas, beyond borders and given it much to witness this epic. All sorts of weird wishes were evident in the thousands of eyes. Some wished they were mighty enough to blow away the clouds, others contemplated shifting sites but could get view, and some sought Divine intervention while the seemingly helpless gawked in shock almost being reduced to tears. It was a tense period to brave. The drop in temperatures and reduction in intensity of light were unnoticed as many could not accept the possibility of being denied a view of the hybrid eclipse. It appeared as though a heavy down pour was due yet the clouds up could not justify this. The scotching heat had been attenuated to a cool breeze that grew goose pimples on people’s skins. Slowly darkness was falling during the day! Everyone was hankering to unravel the mystery shrouded by the clouds but all attempts were left to mere imagination since no mortal man has that mighty. While everyone inertly lamented and scorned the clouds, patience was running out as the spectacular moment was nearing. Suddenly the clouds began to pull away much faster. 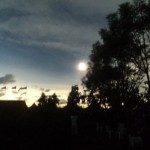 A photo taken directly by camera when the sun was nearly totally eclipsed.

You would have noticed the peak of anxiety and the beaming of faces as the sun’s “weak” rays pierced through the waning clouds. Ululations and jubilations rang in the air as the sun was laid bare for all to see! It was dusking fast for a starter. As seen through protective screens, the sun was now a mere thin crescent slowly getting exterminated! The cheers and ululations from the exhilarated viewers intensified. The sun had never looked as futile as it did in the face of the moon and mankind.

Adrenaline was soaring and hearts pumping faster, the sun was caving in and the world was darkening. The last speck of the sun was finally sealed off; total darkness engulfed the area throwing the crowd of viewers in total frenzy. Congratulatory hugs were shared; tears of wonderment and joy flowed, the religious said a prayer on their knees and the curious ones kept glued to the magical spot. The sun was shy to the naked eyes of man! It was undoubtedly the most fascinating 20 seconds’ period ever! Animals cried and birds sang thinking night was falling alas, it was the hybrid eclipse!

The union of the sun and moon ended with the appearance of a picturesque diamond ring drawing wild cheers from the crowds. Thence forth the sun started to regain its relinquished might. Nevertheless, full light of day could not reappear in a flash thus it was still slightly dark. The viewers buzzed like bees, all relishing the chance of making history as eclipse viewers. They recited everything like it happened, as if reading from a script well inked in their minds. Others danced in disbelief while some rushed to purchase souvenirs to compound the days’ memories. The eclipse excitement was not ending there. Stories were definitely going to be told world over and the after-celebrations were taking shape. 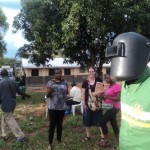 The viewers started dispersing shortly after the climax of the show but all full of stories all over their lips. People from the host community stood by the roadsides marveling at the volume of cars that had come into their area. Something I believe had been never seen there before. An aura of victors was all that engulfed Pakwach town in the evening and late. It was mission accomplished for the curious, patient and brave eclipse viewers.

The hybrid eclipse was a mere emphatic 20 seconds but full of wonders that take more than a decade to resurface. A toast of victory to all the gallant witnesses of the Hybrid Eclipse 2013 and if you missed it, remember you still have a chance of viewing it 0n 3rd June 2114. Hope you will be there!