The Hybrid Eclipse of the Sun November 2013

The next solar eclipse on our annual calendar is due November 3rd, according to the Astronomical almanac. It will be a hybrid eclipse visible from eastern North America, southern Europe and Africa. Uganda will be one of the few countries in Africa where this rare type of eclipse will be observed. The rest of the countries are Ethiopia, Somalia, Kenya, Democratic Republic of Congo (DRC) and Gabon. 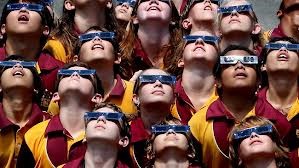 An eclipse is an astronomical event that occurs when an astronomical object is temporarily obscured, either by passing into the shadow of another body or by having another body pass between it and the viewer. An eclipse occurs when the earth, sun and moon align along their elliptical paths. The fascinating spectacles are due to a shadow being cast on the moon in the case of a lunar eclipse or the moon passing directly between the earth and the sun in the case of a solar eclipse. In a solar eclipse the moon obstructs the sun partially or completely as viewed from the earth.

A Hybrid eclipse is a fusion of total and annular eclipse. This is because observers in one part of the earth observe annular eclipse while other observers in another part of the earth experience total eclipse. The moon is believed to have formed about 4.5 billion years ago and has been gradually moving away from the Earth by about 1.6 inches, or 4 centimeters per year (http://www.space.com/15584-solar-eclipses.html). Right now the moon is at the perfect distance to appear in our sky exactly the same size as the sun, and therefore block it out.

Since ancient times, eclipses have been associated with numerous myths by communities that are ignorant about astronomical knowledge. They were interpreted mainly as bad omens or signs of discontent by the gods. Eclipses are also well documented in history and have offered hints to efforts to trace various historical events. A prominent attempt was probably one to accurately trace the date of Good Friday by assuming the darkness described at Jesus’ crucifixion was a solar eclipse. 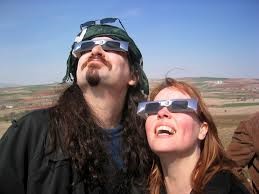 In the event of this hybrid eclipse, viewers along its path will witness a short spell of total darkness as the earth’s light will be full cushioned from reaching the earth by the moon. Minimally the eclipse will last 1 minute and 11 seconds while maximally, it will be 1 minute and 40 seconds. In Uganda the eclipse will be viewed, in districts of Gulu, Arua, Pakwach, Lira and Soroti.

This rare eclipse offers an important tourism opportunity to Uganda which already has other exclusive global touristic attractions such as the only surviving mountain gorillas, numerous endemic bird species, mountain ranges, river Nile, historical sites among others. Tourist can be able to book their safaris to coincide with this once in a life time spectacle and have an irreplaceable safari experience that will forever stand out in life.

The fact that a hybrid eclipse is a once in a blue moon occurrence makes it a much fancied spectacle that anyone would love to witness. The last hybrid eclipse is believed to have occurred on March 16th, 1466. The next hybrid eclipse after 3rd November 2013 is projected to happen more than 100 years from now: on June 3rd, 2114. Chances for anybody living to witness the next of a kind are inevitably rare. You do not have to miss this chance of witnessing this fascinating phenomenon! Book now with Speke Uganda Holidays and get a story to tell for your lifetime!